Direct link to GOOGLE from here
If you are new to Hawstead this little INTRODUCTION TO THE VILLAGE will be helpful to you!
Here's a link to a document explaining the byelaws relating to the village greens. It is called "Byelaws for Pleasure Grounds, Public Walks and Open Spaces" and includes an indicative map of the locations of our greens (and the Millennium Field).
Here's a document listing the Parish Council's Objectives

Here's a link to the Met.Office forecast page for Bury St Edmunds.

A library of important documents relating to the Parish Council and the village, including meeting agendas & minutes and copies of the Hawstead Journal.
Click here for more information.

Please note that archive material posted onto the website before 25 May 2018 may include limited personal data for which consent to publication has not been given. The Parish Council wants to continue to make such material, which is of local interest, easily available to residents, but has not had the capacity to review the content fully. Please contact the clerk to the Council if you have any objection to your name or other personal data appearing in this archive material in order that it might be removed forthwith.

To view the film made by Andy and Janet Taplin in support of our bid for the Suffolk Village of the Year competition (ie 2014)click HERE. It's a fantastic production!

Most documents posted on this site are in the "PDF" format and to see them on your compputer you need a program called Adobe Reader. If you don't have this on yoour compputer you can download and install it Free of Charge here

The Metcalfe Arms has been transformed into a cycle shop and cafe: there were articles in East Anglian Daily Times and in the Bury Free Press. in January 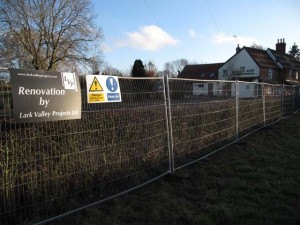 The Future of the Metcalfe Arms

Local businessman Barry Denny and his son Matt are both keen cyclists. Matt’s company, Lark Valley Projects, bought the Metcalfe Arms pub, along with 5 acres of adjoining land, in the Autumn of 2013.

Barry was interviewed about this on Radio Suffolk on Thursday, 9th. Jan. 2014  because unusually the project was not to refurbish and reopen the pub, but to turn it into a licenced café and cycle shop. Barry said that in his opinion the centre of town is the wrong place for a cycle shop – it should be out there in the country where recreational cyclists go!

Barry is vice-chairman of the West Suffolk Wheelers cycle club, whose chosen dress colour when riding out is red: he and Matt have chosen red as a theme – in name at least – as they have called the business “Maglia Rosso”. This is Italian for “red jersey” and is the colour worn by leaders in Italian cycle races.

During the radio interview, Barry extolled the virtues and pleasures of our country area south of Bury St Edmunds: since Hawstead is not on any current regularly-used cycle routes, he plans to encourage riders to come this way by compiling a series of maps. Clearly the “Maglia Rosso” will feature as a stopping-off point for refreshments!

The shop caters for enthusiasts interested in the “mid to high end”, expenditure-wise: other features include cycle hire, cycle repair and a ‘training’ area in the adjoining field. The shop is at the front where the bars were, but with an entrance on the car-park side. Also on this side, but at the rear, is the café, and naturally Hawstead residents are welcome and are encouraged to use it.